Another probiotic drink that is very popular in Australia is called Biobubble. It contains a heap of fermented grains and legumes mixed with a bit of organic honey, fresh lemon juice, and over 200 strains of beneficial organisms.

Biobubble—it’s an ideal additive for baking bread. It serves to mediate and provide microbial support, much as plant juices—or even the clay in the soil—do. This balance between the digestive processes of lime (CaO) and the ripening processes of silica. The result is a rich flavourful bread that surmounts the three chief problems most people have with—phytic acid, yeast and undigested gluten. Phytates block absorption of magnesium and zinc. Yeasts exacerbate Candida problems and undigested gluten triggers allergies.

You can substitute “Ginger  Beer” for “Bio-Bubble”.

A simple recipe for Buckwheat Bread is given in this “recipe image” above. Although I can’t find Bio-Bubble in Canada, nor can I find a recipe to make my own, I did find a recipe for making Ginger Beer with kefir grains.

Funnily, my daughter, who took the kombucha workshop, didn’t really get into making it regularly—but her sister did! Instead she turned to making home-made beers to share with friends, and really enjoying honey ale, but concerned about the quantity of sugar. Before Christmas, she spoke of her intention to start making batches of Ginger Beer, which I mistakenly assumed to be an alcoholic beverage – though it certainly can become alcoholised if stored for a longer period of time.

If you’re a fan of kombucha, you’ll love this fizzy, refreshing ginger beer made with kefir grains. Kefir is a mix of bacteria and yeasts that naturally takes the form of white “grains.” You can buy kefir grains online or look for them at your local health food store. Once you’ve got them in hand, it’s easy to home-brew up a probiotic, soda-like drink that supplements your body’s natural population of disease-fighting bacteria, improves your immune system and may even fight pain. Generations of Turkish shepherds swear by it, but the traditional kefir recipe is more like a thin, sour yogurt. While that’s delicious too, this “water kefir” drink is light, bubbly and refreshingly quaffable.

Being a fermented beverage, this has a small amount of alcohol that increases the longer you let it sit. Drink it within two days and you’ll stay relatively sober, plus avoid any risk of exploding jars.

Note: Authentic ginger beer comes from a “ginger beer” plant which was the original probiotic. However, it’s hard to come by, so Kefir grains are a close substitute, and is closer to the Bio-Bubble from Australia which contains a large mixture of grains.

OPTIONAL: 1 cm or 1/2 inch square piece of eggshell from a boiled egg, either used as flakes or coarsely ground to grit. The calcium helps kefir grow, but if you have good fresh grains it shouldn’t be necessary.

Then I discover that, true to form, my daughter had already given me a recipe for ginger beer in a new cookbook she had given me for Christmas. I’ve been perusing through it, rather lazily, picking out recipes here and there to try out, and discovering beyond authentic recipes that delve into nutritional value, political scandal, medical history, folktale connections, cultural insights, or ethno field notes. So many transgressions!! It’s called “Nourishing Traditions: The Cookbook that Challenges Politically Correct Nutrition and the Diet Dictocrats”. The title gives you the gist.

The recipe found there is quite simple:

Two tsps of the ginger and white sugar are used to create a culture within seven days. The cane sugar is used for the larger quantity that goes into the beer. Another seven days to feed the larger culture. And if it produces bubbles, go to the next stage. If not, throw it out and start again. To continue, go through two more stages: 7 and 14 days consecutively. As you can imagine, this technique requires a lot of patience and many moons to

As I had understood it to be, it says, “Throughout the British Isles, grains were fermented into various sorts of ales. … These beers were an excellent source of nutrients: vitamins, minerals and enzymes. Local beers contained only a small amount of alcohol, but large amounts of lactic acid and beneficial enzymes, was traditionally consumed in the morning, accompanying a heavy breakfast of fish or cold meat, bacon and eggs. Stronger beers, with their high content of alcohol, were recognized as providing “comfort for the poor.” The poet John Taylor recorded a total of nine different ales served at the same meal, during a visit to Manchester in 1618. Eight of them were herbal ales, flavoured with hyssop, wormwood, rosemary, betony and scurvygrass.”

Then the next sidebar leaps over to inform us about the connection between Alzheimer’s and aluminum found in municipal drinking water. (Comparable, though not as severe as the cumulative effects of mercury found in fish oils).

Well, if you’re still a bit squeamish about probiotic drinks, you’re not sure you can maintain a structured program for managing them, or just not enjoying and benefitting from them … try making some home-made vitamin water, like the examples shown below … refreshing any time, like post work-out, on hikes, or just relaxing outdoors … also great for one day fasts:  just keep adding water throughout the day, easing off gently. 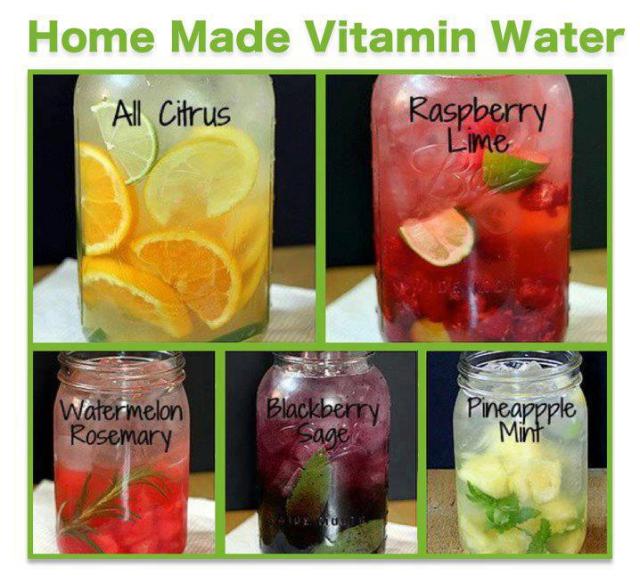 mother, poet, educator, grower, healer
View all posts by Lily Lavendar →
This entry was posted in Uncategorized. Bookmark the permalink.